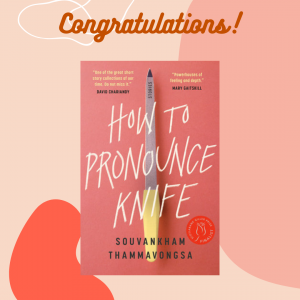 Borrow How to Pronounce Knife from Markham Public Library.

The other shortlisted titles included:

In her stunning debut book of fiction, O. Henry Award winner Souvankham Thammavongsa focuses on characters struggling to make a living, illuminating their hopes, disappointments, love affairs, acts of defiance, and above all their pursuit of a place to belong. In spare, intimate prose charged with emotional power and a sly wit, she paints an indelible portrait of watchful children, wounded men, and restless women caught between cultures, languages, and values. As one of Thammavongsa's characters says, "All we wanted was to live." And in these stories, they do--brightly, ferociously, unforgettably. (Penguin Random House Canada.)

Souvankham Thammavongsa is the author of four acclaimed poetry books, and the short story collection HOW TO PRONOUNCE KNIFE, a New York Times Editors' Choice and recently a finalist for the 2020 Scotiabank Giller prize, out now with McClelland & Stewart (Canada), Little, Brown (U.S.), and Bloomsbury (U.K.). Her stories have won an O. Henry Award and appeared in Harper's Magazine, The Paris Review, The Atlantic, Granta, NOON, Journey Prize Stories 2016, Best American Nonrequired Reading 2018, O. Henry Prize Stories 2019, and Best Canadian Stories 2020. She was born in the Lao refugee camp in Nong Khai, Thailand, and was raised and educated in Toronto where she now lives. (Souvankham Thammavongsa.)

The jurors of the Giller Prize committee wrote, "How to Pronounce Knife is a stunning collection of stories that portray the immigrant experience in achingly beautiful prose. The emotional expanse chronicled in this collection is truly remarkable. These stories are vessels of hope, of hurt, of rejection, of loss and of finding one’s footing in a new and strange land. Thammavongsa’s fiction cuts to the core of the immigrant reality like a knife – however you pronounce it."

Thammavongsa said, in her acceptance speech, "Thirty six years ago I went to school and I pronounced the word knife wrong and I didn't get a prize. But tonight there is one."